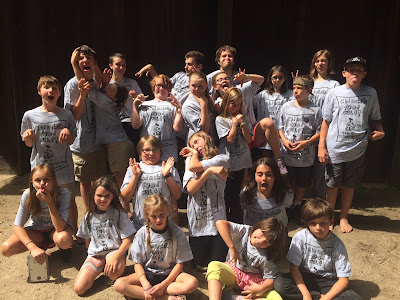 Today was our last day together. We gathered for the last morning's singing. It was clear that everyone was feeling a lot of big feelings on the last day. On the one hand, we were celebrating a successful town, a fun Mini-Fair and all the times we shared this summer. For the same reasons, we were also sad to leave. We sang our favorites with a lot of emotion. Several homesteaders danced around the circle as we sang, arms waving emphatically as they acted out the action of each song.

From singing we dove head-first into cleaning up camp. We took down our mini-acres and disappeared the perimeter markers of the town. Homesteaders removed fences and filled in pools. Homes were removed and set aside to take home. There was much discussion of importing buildings for next year, so that they could "move on to other stuff quicker, like government and businesses and stuff."

We worked in mostly focused groups to put the trading post and workshop to rights, then moved off  out of camp to play games while the commissioners set up for the auction.


After lunch we gathered for the auction, which featured a lot of items gathered with Homesteaders' interests in mind. There were Rubik's cubes and Magic cards, a protractor and compass set, books on how to draw animals and human figures, a lot of Unicorn-themed items, various types of slime, squirt-guns, some shiny purses and a few other sundry items.


The auction was fun and funny, and both Homesteaders and Commissioners had a lot of energy. As Homesteaders ran out their funds, many found that others with money left would share their remaining Rainbows. Everyone went home with something(s) that she or he had coveted at the auction table. 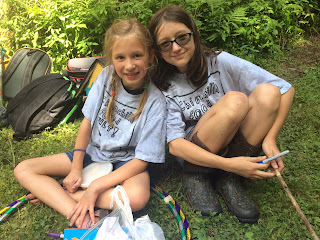 After the auction we had Campfire snacks and final ceremonies. We signed shirts, told jokes and toasted 'mallows out behind the barn, then moved inside to give awards, share a few campfire performances, share Props and give out Peep U caps, gowns and diplomas. Peeps who attended 6 or more community college classes received a "Peep U" degree. 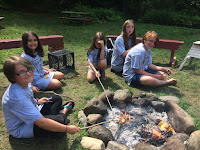 Finally with mixed emotions, a lot of hugs and only a few forgotten items, we said our goodbyes. It was a great summer together at Village 2017.


Much Village love to all!
See you next year!

Popular posts from this blog 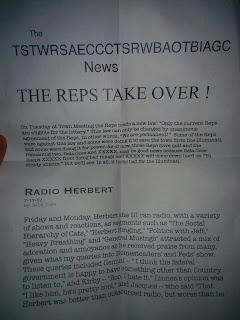 It is day 22, Mini-Fair Eve, and also appraisal day. Homesteaders crafted up a storm preparing for these two events! Side one of last week's newspaper: a must read! Side two After singing and groupies, there was ONE LAST werk berzerk block to work on houses before appraisal time! The barn was real' busy with painters, sculptors, and hot-gluers. Some homesteaders also went to their lands to reinforce fencing and do other landscaping. Final touches Alex ??????'s finished land! Appraisals happened after snack! Groupies and their leading commissioners toured the town and stopped at each property to read its blurb and evaluate pricing. To achieve their appraisal amounts, homesteaders took the median of all of the price-tickets their homes received. We think this method is fair because tickets with R0 or R100,000 will just add more place markers to count the median off from, rather than skewing an average. The most va
Read more 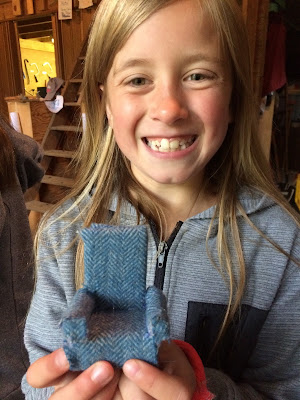 A new comfy chair for Tiffny's home. Today at Village was all about getting ready for Appraisal Day. The weather seemed to understand our sense of urgency and let up on the rain as Homesteaders worked steadily throughout the day to put final touches on houses, fix up fences and made ready to show of their Peep's miniature Homestead. We started out with some Swangan' Sangan' in the circle outside. We hardly needed the lyrics as we belted out our favorites. By now we've developed a common repertoire and Homesteaders needed little prompting as they suggested song after song. People didn't discuss, they just started up singing the first lines and everyone joined in. There was barely leaving time to breathe after finishing one song before we began another! We sang about Llamas, the Dones, the Candy Land, a family of sharks, poor Eddie Cootcha-Ketcha-Cama, Black Socks and Meatballs. Gus shows off Soma arrangements in the circle. After sangin
Read more